Mounting Brackets & Model Designator
HORIZONTAL MOUNT:
Small rooms can be heated by one unit heater. Where two walls are exposed, heaters should be mounted as shown in Figure A. In larger rooms, units should he located so their air streams wipe exposed walls without blowing at them. Units should be located so that the air stream of one supports that of another thus setting up a circulatory air movement shown in Figure B. (Distance between units to be approximately 1-1/2 times published air throw.) Units should not be mounted horizontally in areas having ceiling heights in excess of 15-18 ft.
VERTICAL MOUNT:
Units should be mounted vertically in high bay areas, or where heater location would not interfere with plant operation or traffic, Heaters should be situated to provide free air circulation. Size and selection of units should be based on recommended mounting height. Optional diffusers may best be employed to reduce high air velocity and at the same time disperse heated air in a uniform pattern. When unit heaters are used to combat cold air inrush from opened loading dock doors, one or more units should be arranged to blow warm air across opening (Figure C).
DUAL MOUNTING:
Where square footage is large and comfort essential, both horizontal and vertical installations may best serve your requirements as Figure D demonstrates. 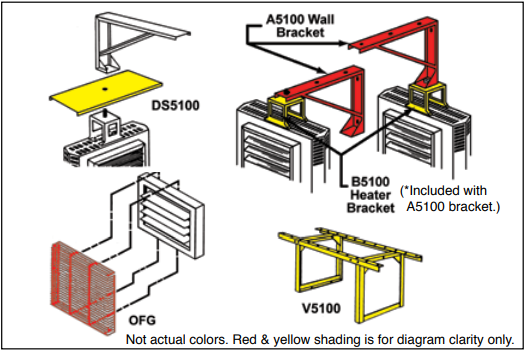